The method of "Goal Directed Visual Context Scenarios" for innovation management is derived from the Goal Directed Design Process and blended with Requirements Engineering techniques. In Goal Directed Design user goals inform or direct all design decisions regarding a future product, service or process. A goal is a final purpose or aim, an objective driven by a need. Future users with their needs, goals and their motivation are described with the use of "personas". Personas are not real people, but they represent them throughout the design process. They are hypothetical archetypes of actual or possible users. Although they are imaginary, they are defined with significant rigor and precision.


This activity is not suitable online.

Typically, users have to perform tasks in order to accomplish a goal. Since there may be multiple ways of achieving a goal, the set of tasks may vary broadly. A goal directed context scenario is a textual description of a persona's interaction with the future product, service or process. Each scenario begins with a specific situation, then describes the interaction between the persona and system from the beginning of a task or session through its completion. A scenario describes the actions of the persona and any behavior or actions of the product, service or process evident to that persona. Along the way, a good scenario explains the persona's motivation and emotions for particular behavior and indicates what persona goals the system's behavior achieves. In the early phase of the design process, the so-called context scenarios are high level and optimistic, focusing on ideal system behavior in situations that will happen. Context scenarios do not include specific solutions. Rather, they describe an entire session or typical task based on what the persona would see as the task's beginning and end. This could involve a single function or several dozen. Goal Directed Visual Context Scenarios put all these things together and tells the story of a scenario by visual means. This can be done by taking photos of contextual information or of some specific situations in the task flow. It also can be done by sketching specific conditions by hand. Narrative annotations can also be done with post-its. In Innovation Management, one of the most challenging parts is to select and drive these ideas, which have the potential to be implemented into a valuable, usable and feasible product, service or process and thus, marketable. We propose to apply the method "Goal Directed Visual Context Scenarios" in the early visioning phase for the evaluation, shaping, refinement and redefinition of ideas. For this, the method allows three degrees of freedom to play with: The context in which the innovation is reasonable and will be successful. The persona, the target user, for whom the innovation will be valuable and usable. The goal to accomplish meets a certain need of the persona. 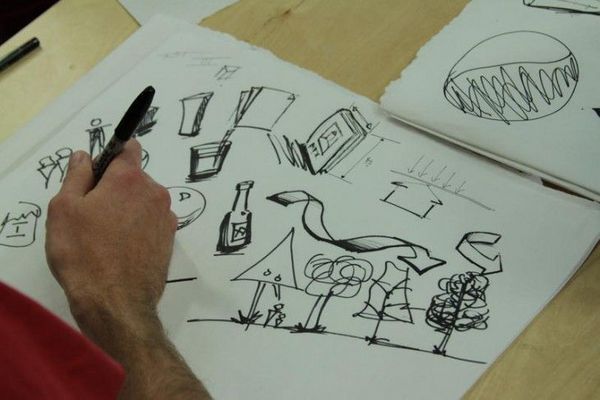